I went home to Cherokee, North Carolina for Thanksgiving with relatives  this past November. While there, I happened on a beautiful mountain stream, the Oconoluftee, on the way to my cousins home. As a mountain landscape artist, I especially love painting waterfalls and mountain lakes. Seeing this reminded  me that wherever we may travel we can usually find the subject matter that we enjoy the most, even when far from home. There are, after all, people everywhere for portrait painters,  and if you love buildings there are structures of all shapes and sizes around the world, the same with flora and fauna, animals, children….and, of course, water! 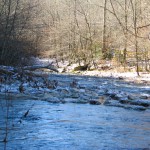 The Advanced Group Show and Fundraiser for the Canmore Hospital was a huge success! the Opening was packed, there were 67 pieces of original art and we sold 27…the work was beautiful ….here is a view of some… 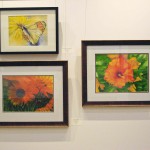 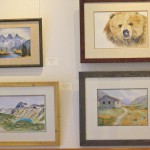 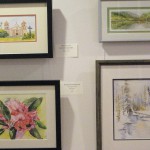 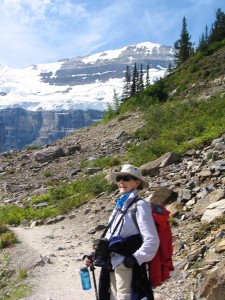 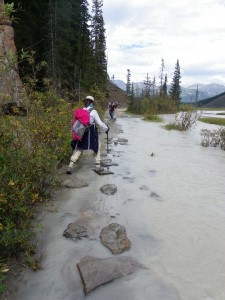 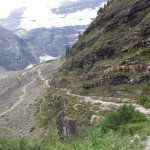 As a landscape artist, I can relate to the description of “placefulness” by Christian McEwen in his book, World Enough and Time: On Creativity and Slowing Down. I have experienced those moments of complete immersion, mindful of the perfection of the place and eager to capture the sights, values and forms for future paintings. One such hike was Plain of Six Glaciers this summer where the 7 mile, 1100 foot elevation gain to a max of 7000 feet  up the valley at the head of Lake Louise presented flooded trail, ledges with chains, and avalanches thundering down. A trail like this employs all your senses- physical, mental and spiritual. If your subject doesn’t excite you in this way, you should ask yourself , why? 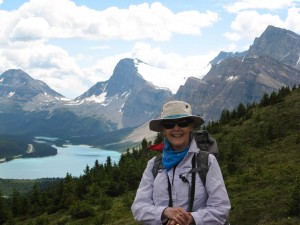 Over the summer I have hiked to some of my favorite places- like Lake O`Hara, and visited new ones- like Bow Summit Lookout. It`s all part of a landscape painters “Sketch Quest“…to seek out the places that speak to you, inspire you and keep you warm through the winter months in the studio! 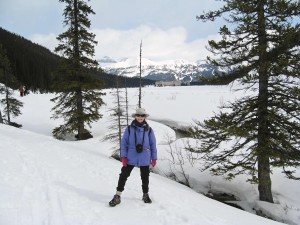 As an artist, in the Canadian Rockies, I frequently revisit favourite areas. I have been to Lake O’Hara every hiking season for the past 22 years, and I have been to Lake Agnes almost every year since arriving in 1976. Why? Because it is always different, or I see something- a view, shadows, weather, a flower, a colour- I had not seen before. On this special day, it was an avalanche across the area where I am standing as my son and I were halfway across the lake. Some artists like to get to know their subject intimately, O’Keeffe had the desert, Charlie Russell cowboys in Montana, Andrew Wyeth had Chadds Ford. An artist has to find their “angle of reponse”- the pace where they come to rest and makes them the best they can be. 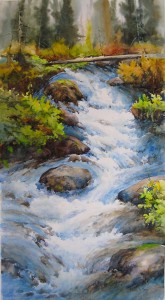 I began this painting in the Thursday Morning Advanced Class in an attempt to get them over the fear of painting large! It is now on display at Canada House Gallery in Banff.

Work that will be in the Whyte Museum Watermedia Show, Jan. 10/13

On the last day of the class, we looked at some of the completed works of the session.

A lot of work and thought went into these pieces and it shows! Each year they get better… 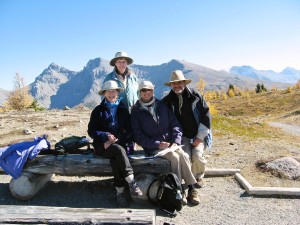 We took a bus up 7 miles to the Sunshine Meadows Lodge and began hiking
-more up! White Mountain Adventures calls this “hiking on top of the world” and our view overlooking the mountains and Healy Meadows was spectacular. We painted surrounded by golden Larches. I am working on a large painting of this view for the Canada House Gallery “Joy” Show on Nov. 24th. 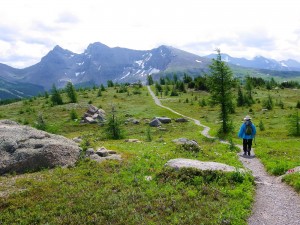 Speaking of directions, I have attached a photo of a recent hiking trail at Sunshine Meadows- it is the Twin Cairns, Simpson Overlook trail….happy painting and brushwork!

Historically, the cardinal direction points have been important in navigation, direction, mythology, religion and now…. art.

In class I was helping someone create a shadow under a log -but she was okay going from left to right with the brush in her hand but when she tried to go back over the shadow she couldn’t change direction. She was trying to keep her hand in the same position and still move from right to left over the top of the shadow giving it a lost and found edge- it wasn’t working. And the time she was taking trying to figure it out meant  that the  shadow color dried and she was unable to get that lovely transitional value.

Instead, when you get to the right-hand side of the page turn the top of the brush to face West-  the opposite direction-   your wrist will also turn…. now you can move the brush smoothly along the top of the shadow.

Practice moving your brush in the  four directions…… point the top of the brush East, West, North and South…bend your wrist as you do this……..

Click the cover to view the article in PDF format